20 min from the Velas Harbour 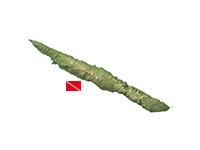 This is an easy dive that takes place at a depth of between 8 and 14 metres in a very sheltered area with few currents. It is also directly accessible from the coast, with an entrance from the tide pools of Urzelina (Portinhos). It is a great place for beginner dives, night dives and snorkelling.

Despite the proximity to the coast, this site offers some great caves and caverns. Heading west from the tide pools, you will find several of these that can be reached without descending far. The one that stands out is a wide cavern located at a depth of 8 metres. Although it appears to be a cave, as you swim into the cavity you will see that it turns into a large cavern, with an opening in the ceiling that lets the natural light in. The interesting cone of light is surrounded by large colonies of colourful yellow cluster anemone (Parazoanthus axinellae).