2 min from the Angra do Heroísmo Harbour

from the Angra do Heroísmo Naval Club 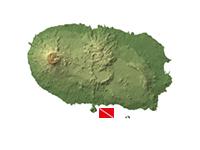 This easy and shallow dive is excellent for less experienced divers and is perfect for beginners and snorkellers. It is accessible directly from land from the Cais da Figueirinha (Naval Club) in front of St. Sebastian’s Fortress in Angra do Heroísmo.

The structure of the shipwreck does not allow you to enter it, but there are lots of opportunities to spot identifiable remains from the ship, particularly around the well-preserved bow area.

Among this historical and cultural heritage you can find a great abundance of small marine species. Fishing is forbidden, which has encouraged large schools of salema porgies (Sarpa salpa) and young red porgies (Pagrus pagrus) to spend time in the water column, as well as a large number of species that have made their home in the remains of the shipwreck. This includes common octopuses (Octopus vulgaris), several species of nudibranchs, Madeira rockfish (Scorpaena maderensis), ornate wrasses (Thalassoma pavo), Azores chromis (Chromis limbata), Mediterranean rainbow wrasses (Coris julis) and blacktail combers (Serranus atricauda), as well as rarer species such as planehead filefish (Stephanolepis hispidus) and streaked gurnards (Trigloporus lastoviza).