25 minutes from the Vila do Porto Marina 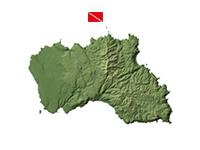 This dive is recommended for more experienced divers as it is located about 10 miles from the Vila do Porto Marina in an area that features moderate currents. Its main attraction is a large cave located at a depth of between 30 and 40 metres.

The rock formations are exceptional at this site, starting with a long lava tunnel that opens at the top of the reef at a depth of 15 metres.  At the end of the tunnel the reef drops gradually until you reach the entrance of the cathedral-shaped cave, located 33 metres below the surface. Inside the cave the depth drops again to 40 metres. You are likely to find large common stingrays (Dasyatis pastinaca) lying still on the sandy seafloor, as well as small and colourful narwal shrimp (Plesionika narval) in the recesses of the walls. With luck, you will also spot large white trevallies (Pseudocaranx dentex) swimming in schools around the cathedral.