10 min from the Horta Harbour 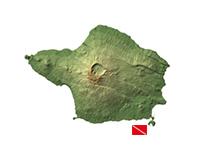 Located on the slope of the Guia Hill, these two very large caverns lie only 50 metres from each other, both at a depth of 20 metres. This dive is only advisable for experienced divers certified to dive in caves, but if that is the case then given the proximity between the two caverns it is possible to visit both during a single dive. You can even stop to visit a small shipwreck between the two.

The entrance to the cave lies at 20 metres, followed by a long corridor that is less than 2 metres wide and ends in a large chamber. There are stunning backlight effects inside the dark cavern and the walls are colourful, with various species of starfish, nudibranchs, European fan worms (Sabella spallanzanii) and narwal shrimp (Plesionika narval).

Heading west to visit the second cave, you make a short stop at the shipwreck of a small metal vessel located at 24 metres. The second cave is similar to the first although slightly smaller. It too has an impressive backlight effect.