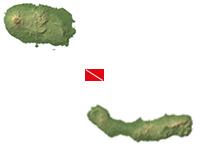 This unique experience begins with a boat trip through the rich seas of the Azores where you can often catch a glimpse of many species of cetaceans, turtle, and seabirds, particularly as you reach the bank.

This spectacular dive revolves around an underwater volcano that last erupted in 1720. During the eruption the top of the volcano, which now lies 13 metres deep, came to the surface and formed the 10th island of the archipelago. Only 250 metres high and 1.5 kilometres in diameter, this small island disappeared about two years later, with the submarine bank found by a hydrographical ship of the same name in 1941.

The entire dive takes place around the old caldera of the volcano which is still seismically and volcanically very active. This activity is particularly visible at the top of the bank (at 13 metres) where thermal springs and fumaroles are caused as gas is released.

This site is only recommended for experienced divers, since it is far from a harbour and prone to strong currents.