10 min from the Santa Cruz Quay 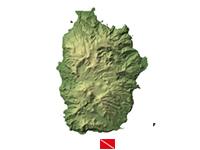 This dive at the top of the Baixa da Feteira (Feteira Reef) is located at a depth of just 6 metres, but is only recommended for experienced divers as it lies about a mile from the coast in an area exposed to currents. It also has a maximum depth of 60 metres. It is one of the most visited spots for divers interested in the observation of large schools of pelagic species, with its greatest attraction being the edges of the reef (to the west or east) that lie at a depth of between 15 and 25 metres.

Located on the south coast of Flores Island in front of the Fajã de Lopo Vaz, this reef drops to about 40 metres in its northern flank and to 60 metres in the southern flank, with several large slabs at 20 metres. It is an ideal spot to wait for schools of Almaco jacks (Seriola rivoliana), yellowmouth barracudas (Sphyraena viridensis), white trevallies (Pseudocaranx dentex) and Atlantic bonitos (Sarda sarda), among many other species that are often seen in this spot feeding on dense clusters of blue jack mackerels (Trachurus picturatus).

At a depth of 35 metres, you will find two caves whose walls are covered with narwal shrimp (Plesionika narval); one of these is usually occupied by white trevallies (Pseudocaranx dentex) and the other by a large dusky grouper and a conger (Conger conger).