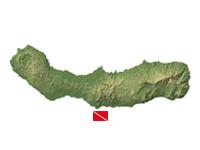 There are great differences in depth at this site, which means the Baixa das Castanhetas (Damselfish Reef) is an excellent option for divers with all levels of experience. Located less than 500 metres from the coast, opposite the Caloura bathing area, the site is a maze of interlinked caverns, tunnels and gorges.

The first cavern is at a depth of 12 metres. It has three wide entrances and is regularly occupied by a school of large white trevallies (Pseudocaranx dentex). From here you can explore a long narrow tunnel full of cardinal fish (Apogon imberbis) and small nudibranchs, before exiting back out onto the reef.

Along the top of the reef there clouds of Azores chromis (after which the reef is named), as well as several other smaller tunnels and caves where it is common to spot large dusky groupers (Epinephelus marginatus). The reef flank drops vertically to depths greater than 45 metres, where it is common to see schools of pelagic fish in the summer and sometimes devil rays (Mobula tarapacana).