5 minutes from the Vila do Porto Marina 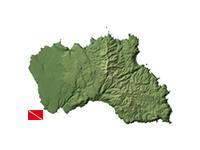 This dive takes place around the small Ilhéu da Vila (Vila Islet), located 200 metres from the southwest coast. Despite the proximity of Vilo do Porto marina, this site features fairly abundant marine life as it is part of the natural park of the island of Santa Maria.

There are several possible diving options around the islet depending on sea conditions. Schools of pelagic fish such as Almaco jacks (Seriola rivoliana), yellowmouth barracudas (Sphyraena viridensis) and white trevallies (Pseudocaranx dentex) are more commonly spotted on the north side of the islet. There is also a small 12 metre deep cave on the same side, where you can find several species of nudibranchs and crustaceans such as narwal shrimp (Plesionika narval).