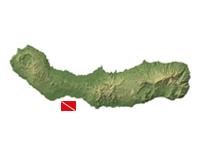 With the top of her stern at a depth of only 9 metres, and the bow in the deepest part at 20 metres, the Dori shipwreck is a great place for all types of dive and snorkelling trips. Considered by many as the best dive site on the island of São Miguel, this wrecked Liberty ship on the sandy seafloor was built during the Second World War in the United States. It was one of the few ships of this type that took part in Operation Overlord along the coast of Normandy, as well as taking part in a number of other wartime missions, and it eventually sank 800 metres off the coast of Ponta Delgada on 16 January 1964. Today it is an underwater archaeological park; the stern, to the north, is still quite intact and is surrounded by clouds of small fish as well as occasionally shoals of pelagic fish. Heading towards the bow, you can see some of the larger structures of the ship still intact, as well as a multitude of large pipes and stairways. The ship’s boilers are regularly surrounded by schools of Moroccan white seabreams (Diplodus sargus cadenati).

Fishing is prohibited in this area, which means that throughout the dive you can spot an exceptional number of common species typical of the Azores Sea.