5 min from the Horta Harbour 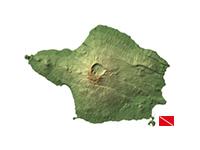 Located in a sheltered bay, with a relatively uniform depth of between 18 and 22 metres, this site is close to the dive site of Baía de Entre Montes and is recommended for all types of diver. It has an abundance of marine life, but also features several imposing cannons and other centuries-old pieces that were removed by a team of archaeologists from the bay of Horta Harbour. They were placed at this location to preserve and protect them.

The entire dive is performed around three large rocks, where the archaeological remains lie surrounded by sandy seafloor. Interesting marine habitat has formed as a result of the rocks and cannons, with many Azores chromis (Chromis limbata), several species of moray eels and even some less-common species for this depth, such as red scorpionfish (Scorpaena scrofa). During the summer months a large number of mottled seahares (Aplysia fasciata) can also be spotted.

Along the sandy seafloor you can spot round stingrays (Taeniura grabata), Atlantic lizardfish (Synodus saurus) and wide-eyed flounders (Bothus podas); while in the water column, schools of Moroccan white seabreams (Diplodus sargus) and grey triggerfish (Balistes capriscus) are common.