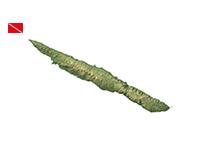 Dives at the Baixa dos Rosais (Rosais Reef) are typically at the top of the reef (15 metres) as this is the main observation point for pelagic species. Despite not being a deep dive, it is only advisable for divers with some experience. Its location, 10 miles from Velas Harbour, and the strong currents make it unsuitable for beginners.

Despite its proximity to the coast (only 3 miles), this is one of the few dive sites of the archipelago that can be compared to the remote seamounts of Princess Alice, D. João de Castro, Formigas and Dollabarat, as it features an abundance of schools of pelagic fish. At the very top of the reef it is common for large schools of fish to surround the divers, often feeding on small prey. The most common species are Almaco jacks (Seriola spp.), bluefish (Pomatomus saltator), yellowmouth barracudas (Sphyraena viridensis), Atlantic bonitos (Sarda sarda) and bonitos (Katsuwonus pelamis), but there are also some less common species such as red scorpionfish (Scorpaena scrofa) and moray eels.