40 minutes from the Vila do Porto Marina 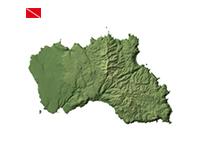 The Marine reserve area of the Baixa do Ambrósio (Ambrósio Reef) is one of the most visited and sought after dive sites of the Azores. Despite being only 3 miles from the coast of Santa Maria, it has incredibly diverse and abundant marine life, the likes of which are usually only found on the remote seamounts many miles from the coast. There are often huge groups of devil rays, a draw for many divers.

Although this is a deep dive and is often subjected to moderate to strong currents, it is accessible to less experienced divers and even suitable for snorkelling as much of the marine life is at a very low depth. Most divers opt to hang to the anchor cable at a depth of between 5 and 15 metres, which provides the perfect vantage point for groups of devil rays as well as also large schools of Almaco jacks (Seriola spp.), yellowmouth barracudas (Sphyraena viridensis), and bluefish (Pomatomus saltator).

For more experienced divers or technical divers, it possible to explore the seafloor where there is a small 50-metre platform located at a depth of 46 metres. It is abundant with life and you are likely to see large round stingrays (Taeniura grabata) and red scorpionfish (Scorpaena scrofa), as well as large schools of pelagic species such as Almaco jacks, bluefish and even ocean sunfish (Mola mola).