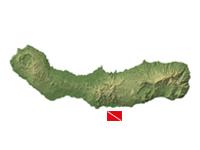 The site is 14 metres deep, with the sandy seafloor at a depth of 22 metres. There are approximately  a dozen anchors, the earliest dating back as far as 300 years ago and the largest over 2 metres long. Its proximity to the marine reserve of the Vila Franca do Campo Islet means this is also an interesting site for marine life. It is common to find several species of moray eels and nudibranchs, while along the sandy seafloor you may spot large common stingrays (Dasyatis pastinaca) and small surmullets (Mullus surmuletus).